Back in the middle of August my friend Barb, our kids, and I left on a Thursday afternoon to head up to Mullett Lake for the weekend, with our husbands joining us Friday night. Â We had planned on the 2 youngest sleeping the majority of the trip and Asher watching his Thomas DVD’s. Â We were also timing it so we wouldn’t hit any traffic. Â However what we thought would be a peaceful drive turned out to be not so peaceful.Â Within the first 20 minutes we were stuck in traffic due to a car accident and unable to get off the highway to take a back way, after about a 1/2 hour (which with young kids is a long time) of being stuck in traffic we finally got moving! Â Things were going well and all the kids were watching Thomas until Asher pulled the plug and since he was in the way back Â I couldn’t get to it to start the movie. Â This led to everyone beginning to fuss, so we decided to stop to plug things back in, not even an hour into the trip! Â Thankfully Asher didn’t mess with the DVD player till again till about 4o minutes away from our stop for dinner. Â Overall the dinner stop wasn’t bad until Vivienne decided to knock the tray with my dinner on it off the table. 🙁 Â After about an hour stop, which included changing several poopy diapers and trying to figure out a way to keep Asher from unplugging the DVD player, we were on the road. Â Everything was peaceful for about an hour or so. Â After another hour Vivienne was chewing on a teething cooking and started choking so we had to pull the car over on the highway and help her. Â I got her all squared away but she was quite worked up from the whole episode and was fighting sleep, so for the next hour she cried and cried and cried. Â At some point Jacob joined her but he eventually calmed himself down. Â Thankfully after all the craziness we made it and it was worth the trip! Â We had a wonderful weekend playing in the sand and swimming. Â Here are some photos from when we first arrived. 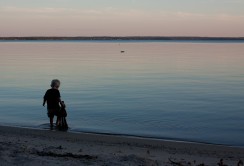 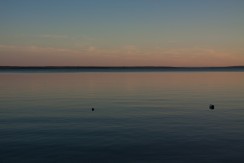 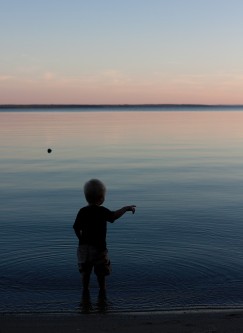